VIP Family Membership Terms
X
X
Welcome!
Please enter your email address and create a password.
Thanks for being a part of the Road Runner Sports Family!
New Balance

Pad your wallet even more with FREE standard shipping every day. No minimums like those other guys. Plus, all your in-stock items will be packed on the truck within 2 hours of placing your order. learn more

Men's NEW BALANCE® 990v4 :: Experience American-made craftsmanship at its finest with this fourth generation of the 990 series, the Men's New Balance 990v4. Enjoy the perfect blend of cushioning and stability, while getting enhanced foot comfort from the improved breathability and re-designed tongue. You'll also notice better medial support thanks to the new midsole mold design, as well as plenty of stay-seen safety for low light conditions, complements of the 990v4's powerful reflectivity.

SHOE CATEGORY What is this?

Calling all overpronators! The 990v4 is the shoe you’ve been waiting for. The ENCAP® midsole technology means extra-soft cushioning designed specifically for you - low arches works to relieve foot, knee, and hip pain. A stability web built throughout the shoe also aims to prevent rolled ankles and to encourage a correct stride cycle that lessens the chance of future injuries.

Worried about overheating on your runs? With a mesh upper that’s 30% more breathable than past iterations, the 990v4 lets you keep your cool even when the competition starts heating up. The only thing blazing will be your speed!

Seasoned runners like yourself know it’s critical to invest in a pair of shoes that won’t fall apart after just a few uses. Rest assured that the 990v4 is built to last with durable pigskin leather and sturdy blown rubber so you can run to your heart’s content.

What People are Saying About the Men’s New Balance 990v4

Guys who tried out the New Balance 990v4 appreciated the variety of widths offered by this model, and many reviewers said this was the only stability shoe that properly fit every part of their feet. You’ll feel like the 990v4 was customized just for you as soon as you take it out of the box.

Reviewers who enjoy running after the sun goes down applauded the 3M™ Reflectivity of the 990v4 - cars and other runners won’t have any issue seeing you sprint by, unless you’re going too fast to be seen by the naked eye. This reflective feature beefs up your visibility at night and gives you a priceless sense of security for those night training sessions.

Apart from runners, men who were on their feet for long periods of time enjoyed the all-day comfort offered by the 990v4. If you’re a nurse, waiter, security guard or have any other job that requires you to be up and about, the 990v4 will envelop your arches in supportive comfort so your feet won’t hurt even after hours of walking around without taking a break to sit down. Finally, shoes that work as hard as you do!

In terms of style, the New Balance 990v4 returns to its roots; when it comes to technology, it soars to a whole new level. Sporting a mesh upper that’s a third more ventilated than prior versions, the 990v4 offers a cool, dry in-foot feeling that will keep you happy no matter how many miles you put behind you.

A new shoelace keeper on the tongue holds down the laces to prevent tripping and ensures the tongue doesn’t shift uncomfortably while you run. To add a little extra stability, the durable ENCAP® midsole unit has been designed to keep you steady even on steep inclines or daring descents. If you’re a fan of a more retro aesthetic, you will appreciate the stripped down style of the 990v4, which is intentionally meant to mimic the original 990 shoe. Style, comfort, and the stability to take on any treacherous path - the shoe is ready to carry you through any adventure.

You can choose from six different width sizes to ensure you can take advantage of the supreme comfort this shoe offers: men’s extra narrow, men’s narrow, men’s normal, men’s wide, men’s extra wide, men’s XX-wide. The 990v4 features a 12mm heel-to-toe drop. We recommend that you buy a half size above your true shoe size to get the best fit possible.

Breathable engineered mesh, durable pigskin leather overlays, and an improved shoelace keeper on the tongue – what’s not to love about the redesigned 990v4 upper? Constructed to offer maximum circulation while still protecting the foot from injuries, you’ll be able to set new personal records in these bad boys on a daily basis.

Feel the power of ENCAP® midsole technology as you spring into action in the 990v4. The core of soft ACTEVA LITE cushioning works together with a sturdy rim of Polyurethane to correct overpronation and ward off the damage that typically occurs with fallen arches.

The blown rubber outsole of the 990v4 pushes this stability shoe to the next level. Head out on a mild trail run or embark on an adventure over steep hills and watch how the high-traction rubber will keep you sure-footed no matter what terrain you decide to conquer. 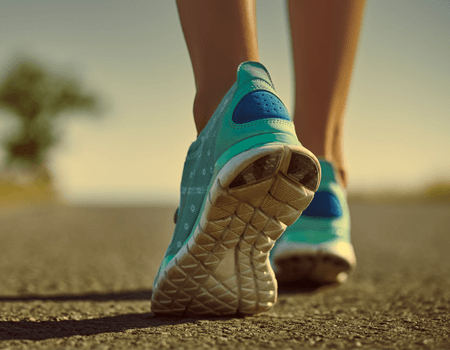 Off your Order Today?

Don’t Get Left Behind!

Get the latest on New Gear, Discounts, Exclusive Offers, Special Promotions and more by joining our VIP Family and the text program

By submitting this form, you agree to receive recurring automated promotional and personalized marketing text messages (e.g. cart reminders) from Road Runner Sports at the cell number used when signing up. Consent is not a condition of any purchase. Reply HELP for help and STOP to cancel. Msg frequency varies. Msg and data rates may apply. View Terms & Privacy.

Sign up for awesome emails and be 1st to hear about sweet, new shoes & lots more!

Don't miss out on savings & more! Sign up for emails!